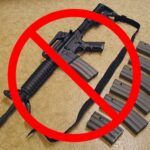 On July 14, 2022, SMF filed Brumback v. Ferguson in Yakima County Superior Court to challenge Senate Bill 5078, Washington’s “high-capacity” magazine ban. SMF partnered with attorney, Scott Brumback, who is also a plaintiff in the case. Our second plaintiff is a firearms retailer, Gimme Guns, out of Selah. We’re excited about this case for these reasons:

We believe that the facts, our approach, and the new US Supreme Court analysis lead to the perfect storm to challenge SB 5078.

AS SOON AS we served Attorney General Bob Ferguson with the lawsuit, Mr. Ferguson had the case moved to the United States District Court for the Eastern District of Washington.

NOW, this case sits in Federal court. The Alliance for Gun Responsibility filed a motion to intervene to join as a defendant, which was granted by the court. With intervenor status granted, we have double the battle to protect your rights!!

WE NEED YOUR FINANCIAL SUPPORT to help staff and fund our legal team. Consider donating to the Second Amendment Legal Fund.