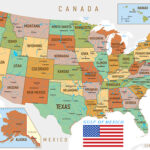 The federalism argument has been at the heart of recent court decisions and great public debate.  Cases such as abortion, legalized sports, marijuana, and sanctuary cities just to name a few, have highlighted the recent court docket.  The tenth amendment clarifies the division of powers between the federal government and the individual states.  It underscores the mandate that the federal government has only the powers issued to it by the U.S. Constitution, whereas the remaining power belongs to the individual states, or the people.

The original U.S. Constitution of 1788 contained very few specific restrictions on the way in which the power of the national government could be exercised against the people.  The need to include the tenth amendment was mostly to placate the anti-federalists that were concerned about a powerful federal government.  Its eventual inclusion in the bill of rights came a few years later.

Derived from the original Articles of Confederation, the tenth amendment expressly prohibits “implied power” assumed by the federal government.  It hammers home the premise by stating “each state retains its sovereignty, freedom and independence, and every power, jurisdiction, and right, which is not by this Confederation expressly delegated to the United States, in Congress assembled”; and leaves nothing left to postulate.

Recent court cases accurately depict the genius of the framers and ratifiers of the constitution.  In 1976, a long line of cases began to emerge and give substantive constitutional context to the tenth amendment.  Since then, in subsequent cases, the court has indeed found judicially enforceable limits on the power of the federal government to regulate the states.

The tenth amendment is now widely used in America’s courts when states feel they are being pressured to comply with federal statutes.  Simply look at recent rulings regarding abortion, federal funding, COVID mandates and sanctuary cities, they all adhere to a strict interpretation of the tenth amendment and the separation of the powers.

Most recently, the Dobbs decision (also referred to by some as the overturning of Roe v. Wade), was highlighted and at the center of considerable controversy. This ruling laid to rest whether the tenth amendment was applicable on social issues.  With government overreach at its crescendo, the Supreme Court has dealt a significant blow to those that would seek to undermine America’s Constitution, and individual state sovereignty.

You can see why the progressive left seeks to destabilize the court by adding new members, or “packing the court.”

During the pandemic, states like Florida, Texas, South Dakota, Idaho, and Georgia flexed their sovereign muscles, and proved that federalism is one of the most effective ways to combat government overreach and abuse.  As the people grow more and more distrustful of government, we must rely on the individual states to remain autonomous for the sake of the people.  As governments here and around the world become more centralized, the fears of our founders are becoming realized.

As we look back years from now, we will see that the tenth amendment and its strict interpretation was a safeguard against the consolidation of big government.  Of all the problematic overreach taking place, Americans see intrusion of their right to self-governing as the fiercest foe of liberty. Our founders understood that the solutions to our current problems will not be found by centralizing power.  The only purpose centralizing power serves is to oppress the masses.