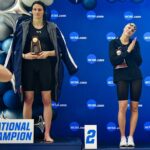 The purpose of Title IX of the Educational Amendments of 1972 was to update Title VII of the Civil Rights Act of 1964.  The civil rights act banned several forms of discrimination in employment but did not address or make mention of education.  Contrary to popular belief, the scope and purpose of Title IX had little to do with sports.  Women’s athletics was considered irrelevant within America’s educational institutions at the time.

Lia Thomas, a transgender athlete, formerly known as Will Thomas, was recently shown winning an NCAA swimming competition in division 1 women’s swimming.  There were barely any cheers after Thomas had won, and many of the attendees held up signs that stated “Save Women’s Sports” in the Georgia Tech arena.  Many of them still remember Thomas competing as a male swimmer for the past three seasons for the University of Pennsylvania.

Emma Weyant, a biological female; and one of the United States top female swimmers, she finished second behind Thomas in the 500 meters.  For most, myself included, believe that biologically Lia Thomas holds an unfair advantage over female athletes in the women’s category.  Thomas’s genetic make-up along with his physical stature gives him an overwhelming competitive edge over female athletes.  This explains how Thomas went from being ranked #462 as a male swimmer, to being ranked number one as a female swimmer.

The effects of puberty are significant, they give men a massive advantage in muscle growth, heart and lung capacity and greater bone density, among other things.   Even if men take female hormones later in life, they will continue to have a significant physical size and strength advantage over their female counterparts.

Thomas, a mediocre swimmer at best in the male category is breaking women’s records and winning races by entire pool lengths in the women’s category.  To be fair, Thomas isn’t to blame; in large part it’s the NCAA’s capitulation and fear of the woke mob.  They’re spinelessness is making a mockery of women’s sports by allowing men to compete with women.  They are singlehandedly destroying the legitimacy of women’s athletics.

Ironically, Title XII induced the flow of female athletes into organized sports within America’s institutions.  Up until then, female athletes were all but non-existent in college athletics. Just think how this will discourage our daughters and granddaughters from aspiring to compete in women’s athletics.  Imagine a world minus Jackie Joyner Kersee, Venus and Serena Williams, or Lindsey Vonn, to name a few.  This is the woke world where biological men compete with women in athletic competition.

Women have now become the sacrificial lambs of wokeness in America.

Allowing genetically altered men to compete as women is no different than doping or any other form of cheating in athletics.  The nexus of Title IX was to create fairness and inclusion across the spectrum in schools throughout America, but the NCAA’s interpretation does exactly the opposite.